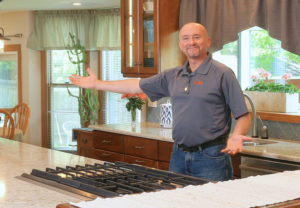 Owner of Take2 Custom Remodeling, Paul Miller, has been in the remodeling business for what seems his entire life.  Paul grew up in Indianapolis, where he learned early on from his own father – if it’s broken, you fix it yourself.  This hands-on approach gained further momentum when Paul realized he also had an eye and passion for design, architecture, and construction while taking drafting courses throughout his school years.  What started as working on the side for family and friends, turned into small jobs.  Before he knew it, the quality of Paul’s work had spread and he had more work than he could handle on his own.  He branched out and started his own business before the economic downturn and an injured rotator cuff put his company to the sidelines in 2008.

Paul was forced to take time away with his injury but he still found that he was spending a lot of time making recommendations and referrals to the following of clients he had created.  Soon enough, Paul realized yet again that his craft was calling him to make an official return.  It was at this time that Take2 Custom Remodeling was officially “reborn”.  Paul affectionately named his business Take2 because he genuinely felt that he had been given a 2nd chance at sharing his gifts and making his business a success.  This was also around the time he and his wife, Eileen, married. It was the start of a new chapter in more ways than one.

Today, Take2 Custom Remodeling is made up of a team of hand-picked Craftsman with the same values that Paul embodies, which helped to create the foundation of his business – the highest quality standards delivered with integrity, trust, and transparency.  Paul is proud of his team and sincerely enjoys the looks on his client’s faces when they see their project coming together.  He especially loves a challenging project and finds the before and after photos one of the more fun aspects of his job.  Additionally, Paul holds a certification in water, mold, and smoke remediation.  Further, Take2 Custom Remodeling recently received the “Best of Houzz” award for service in 2018 and 2019.

When Paul isn’t working towards helping people achieve their dream homes, he enjoys spending time with his family.  Paul and his wife, Eileen, have a 3-year-old daughter, a 10-year-old grandson and 13-year-old granddaughter living at home with them. Paul and Eileen enjoy the lively energy of their home life and love to enjoy the outdoors with them, as well.  Camping, fishing, and hiking are just a few of their favorite family activities.  Just before Christmas 2018, their 34-year-old son, Aaron, welcomed a baby boy into the family.  His name is Gavin and they couldn’t be more proud. Paul and his wife are also very active in their church and enjoy serving their community.

On top of running a successful business, embracing the important role of husband/father/grandfather and leading his community through his actions, Paul is also working through a renovation of his own 80-year-old home, which he firmly believes isn’t broken…but it CAN be fixed.